Assistive Devices improve learning for children with disabilities in Uganda

On a sunny midmorning, Kamurasi Demonstration Primary School’s lawns look immaculately green. The big mango tree that dominates the compound is full of flowers — an indication of an expected bumper harvest in months to come. It is a rainy season. A block of classrooms in the shape of the letter L welcomes the visitors. 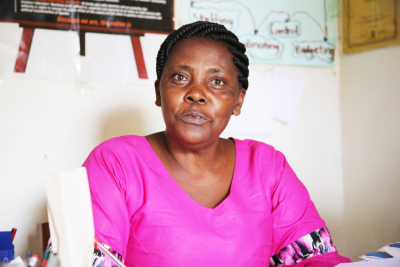 Windows on one of the classrooms are covered with torn grain bags that have been cut out to improvise as curtains. The headteacher of the school beckons us to enter a classroom marked Primary four Crane. It is a dim-lit room. A female teacher shows us empty wooden chairs at the back. We have to bend to access them to avoid some of the used empty mineral water bottles strung together as part of the learning aids. All the pupils stand up to greet us, chorally!

Pairs of desks for the pupils face each other creating a meeting room environment. Six pupils on average occupy each pair of desks. Two pupils with unique pieces of paper and what look like desk pads occupy one of the front tables. Part of the blackboard is covered with about four sheets of white papers of approximately A1 size. In the middle of the classroom exists an imposing black plastic box that is opened at 90 degrees. A small laptop is one of the gadgets in this box that is perched on a high wooden stool.

As the lesson progresses, another teacher touches a button on a computer that sends a ray of light on the white pieces of paper pasted on the blackboard. It is a projector — the last thing one would expect to find in a semi-finished classroom somewhere in Masindi in mid-western Uganda. 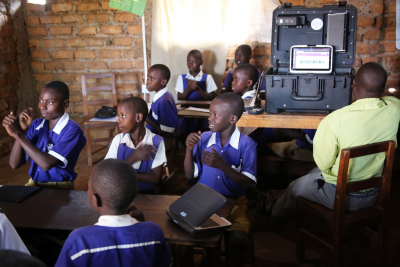 A video of a lesson on what a school library is, is played completely by a sign language teacher. At the end of the video, a teacher hands over an assistive device the size of a feature mobile phone to a female pupil identified as Monica. A button is pressed, and she listens to a lesson about the school library after which the teacher asks her questions. For each correct answer, the whole class claps and at the end of it all, the other pupils make a hissing sound — the one you hear when opening a carbonated drink. Monica imitates somebody drinking soda directly from the bottle to the excitement of everyone. It is her reward for answering the teacher’s questions correctly.

Monica and another pupil, Henry, are blind hence the unique pieces of printing Braille material on the desk in front of them. Although Monica started her primary education at Kamurasi, Henry joined from another school in a neighboring district.

UNICEF/2019/De Barbeyrac
Juliet Karungi, the teacher who conducted the lesson in Primary four Crane, helps Monica to access the audio text book from the Victor Reader.

Kamurasi, named after the paternal uncle who raised Omukama Kabalega — the famous Bunyoro King of the 19th century, is one of the 20 schools in Uganda, that is part ofthe 3-year pilot Provision of Accessible Learning Materials for Children with Visual and Hearing Impairment in Primary Schools Project implemented by UNICEF. Assistive devices were provided to facilitate learning for children who are deaf or hard of hearing and those who are blind or have low vision. These included two laptops, a Victor Reader (the mobile phone look-alike device used to record lessons and to access audio books, so pupils can revise on their own), and a Mobistation (the sturdy black box that includes a projector, laptop and speaker). Solar power was installed to charge the computers and provide lighting. Monica explains:

“I have improved a lot since the introduction of these devices. I can listen to lessons later during my revision time,”

“Previously, it was difficult as there was no reference to what you were not able to grasp during the lesson,” adds Henry Ahaisibwe.

Juliet Karungi, the teacher who conducted the lesson in Primary four Crane, says that “assistive devices have enhanced learners' knowledge. Henry can now use a computer to access curriculum content and read Braille very well.” 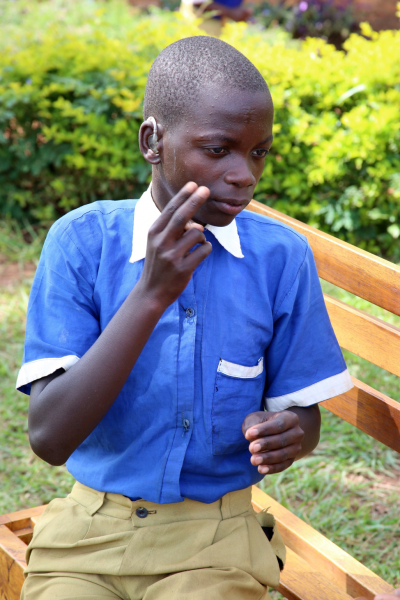 UNICEF/2019/De Barbeyrac
Gerald Omeri, a 12-year-old pupil in Primary Five with a hearing impairment, explaining how the devices have been useful to him.

Gerald Omeri, a 12-year-old pupil in Primary Five who is deaf says that the availability of assistive devices means that he can have lessons even when the sign language interpreter is away. “Through a projector, I can learn a lot during class and use the computer for revision which was previously difficult as I had to depend a lot on Mr. Joseph Baguma, our sign language interpreter,” Omeri says.

He says that since the introduction of the assistive devices, he has tremendously improved. “I used to score 4-5 per cent on average in almost all subjects. Last term, I scored 38 per cent in Social Studies, 29 per cent in English, 34 per cent in Mathematics, and 33 per cent in Science. In two years when I sit for Primary Leaving Examinations, I would be able to perform better,” he says with a wide smile before making a request.

“Can you give us more devices and computers? We are many and what we have are not enough,”

The assistive devices are not only enabling pupils to learn better, but they are also making the work of teachers easier. “They are very helpful when it comes to lesson planning and demonstrations to even pupils without disabilities. For example, a lesson on the human being’s digestive system is better understood by all learners when you show a video than when you simply talk about it,” Amons Byamukama, the teacher who was operating the Mobistation explains.

Last year, two pupils with disabilities from Kamurasi performed better than ever in the national exams because of the assistive devices. “One scored 14 aggregate and another 21 which is very remarkable. Their stellar performance is a direct result of this project. They are now in secondary school in Gulu. We are very proud of them,” says Lillian Byakagaba, the school headteacher. “We are now receiving more pupils with disabilities from the region since we are an inclusive school,” she concludes. 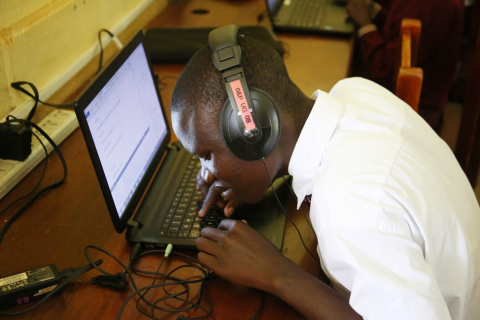 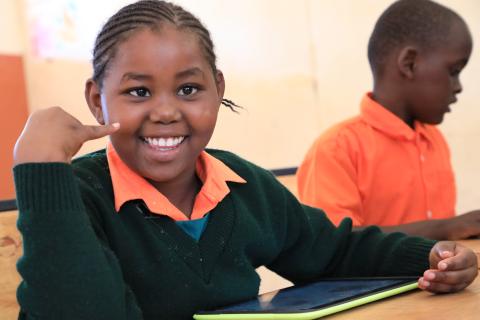 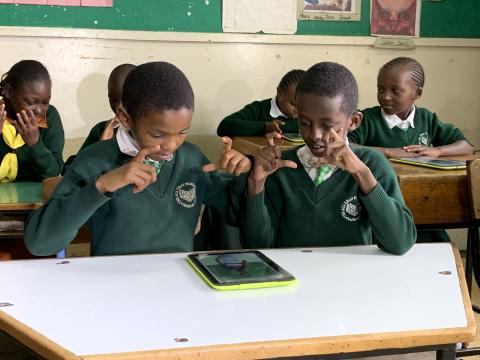 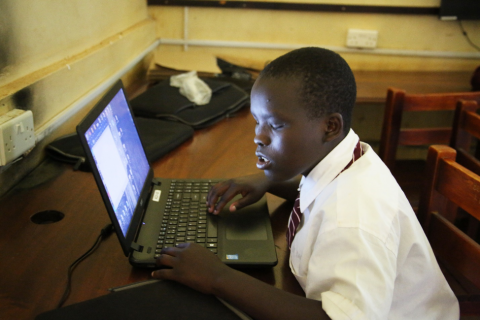